Suffered a lot to finally make up this decision, I’ve accepted a new job offer.

It was a real rush in making this decision, in fact, I made TWO decisions. I rejected it the first time, thinking it was too rush. Then, I was given another chance to reconsider, I took a long time to think of it. Also, a HARD time feeling bad for my current bosses.

I received the offer on Wednesday, and I was told to start on Monday. Seriously really very rush, I felt that I had to be responsible to myself and my current bosses. I just thought that I couldn’t just leave like that and then got everyone into trouble behind me. So, I rejected it for the first time. But then later, I was told to reconsider, a role that I am interested in, an industry that I have been dreaming of, a well increment… I then made up a SELFISH decision, accepted that offer.

I was so scared and worried, I didn’t know how to tell my current bosses. As we are still in good terms, not like we had conflicts and I couldn’t be bothered to stay anymore, which makes it even worse. How I wished we were in bad terms, so that I could just leave without thinking. But, they are nice, VERY NICE instead.

Ever since I made up my mind, I knew that I will DEFINITELY miss my time there, wearing casual to work, flexible working time, easy jobs, light work loads, friendly people, stress-free… The coolest part was, I could MSN chat with my boss. All these soon will be in the history. What I can do now is to contribute as much as I can to minimize their trouble that I have left with, so that they won’t hate me that much =(

I’m also lucky that they are SO SUPER understanding. Once I was told that, a nice boss will never keep you away from a better future, no matter how much they need you.

Now that I’m worried that the new job will be REAL stressful, and I’m afraid that I won’t be able to cope with the corporate environment. I have been too happily living in a super comfort zone, now there comes the challenge.

Good Luck! To me.

OH NO, she was cutting the bum… 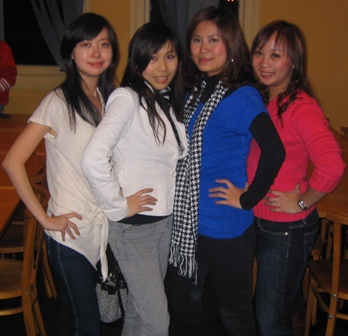 4 HAWT posers ready to do SOMETHING…

How can you leave without SQUEEZING the birthday girl’s boobs? Especially BIG BOOBS?

The Police is going to have their 30th anniversary reunion tour soon. I wonder, if you still remember them? The Police disbanded in 1986, and then they went on individual career paths. But now, they are launching an album with their favourite songs in it. And also, the US and Europe tour. Tickets for more than 100 tour dates were sold out in just minutes, how popular they were!! One of the hottest band in 80’s.

They have a new Police CD with 28 songs in them. They are:

I wonder if anyone actually knows this song, Every Breath You Take… Or, people only know about the Puff Daddy’s I’ll Be Missing You…

And also this song, Do Do Do de da da Da, I haven’t heard this for like SO LONG TIME!! OMG!! I am feeling so old now, but hey, they are still the GOOD SONGS!! If you are around my age, you should still remember them, I am sure my dad and my mom gonna love this CD!! Grab one Police CD for yourself today!!

I hate smart arse, especially those smart arse customers… They like to act AS IF they know a lot, in fact NO…

Today I was so annoyed by these customers… One was asking for a SE K800 charger, so I got him a SE K750 charger, and he was like “I am asking for a K800 charger, not a K750 one”, and then he snatched the charger away from me and looked at it and said “No, this is not the right one”…

I was so wanted to say DON’T ACT SMART!! But I HAD TO be nice and said “Let me just try it”… Once I plugged it in, the phone went “Optimized Charging”… His friend beside him said to him “She knows her work” and I looked at him, he was SPEECHLESS!!

Then, another one… He found what he wanted, and he was TRYING to pull it out from the shelves… I was trying to be nice and asked him whether he needed help, but he looked at me and not saying a word, continued trying hard in pulling… I walked over and did it my way, in just HALF A SECOND… He looked at me and said “WOW, that was easy”… HELL YEA, else that would be a SELF SERVICE SHOP, why would you need me to be there then…

I only work 6 days a week normally, but this CASEY has assignment due on Monday and she obviously will spend the whole weekend working on it. So, I will have to be nice… I am HELPING her… But, I feel sorry for myself…

I think I need a relax and happening weekend, soon.

Do you enjoy living in your home sweet home? Do you enjoy decorating your beautiful home? Check out Just Blinds for something cool and pretty for your windows.

They have all sorts of blinds, shades, shutters, and verticals. Their blinds are made in ONE day, and they have more than 200,000 happy customers who are really satisfied with them. They even have videos and printed instructions for customers to learn how to install those blinds, how considerate they are!

If you are afraid that you might buy the wrong items from them. Don’t worry, because they will make sure that you are satisfied with them, or else money back. What’s even better when you can ask for some FREE SAMPLES? Incredibly great!

Been so stressed recently… Emotional, I hope it’s only me, I hope I haven’t emotionally disturbed anyone here yet… =)

Well, at least I laughed for once at this…

It doesn’t seem like my blog anymore without my camwhoring pictures… I can’t let this be so DOWN anymore… CHEER UP A BIT!!

WOW!! Check this out, the Glamour Campaign is selling so many clothings, they are cute, sexy, feminie, elegant… It’s a place that you can get whatever you want, just in ONE store!!

Now I know why they have celebrity clients!! This is because their stuffs are just too irresistible…

Sometimes, I don’t even know whether I should solve it or not… When you try to solve it, there will be more and more hard time coming up… Sometimes maybe it’s better to keep it flow by itself…

Baby, do you know how much you are worrying me? Do you know how much I try not to worry? I TRIED HARD… But, it is just not working… Sometimes, maybe it is better to not to force you and us, but maybe I should just force myself to be stronger…

I remember someone told me… It’s fine when they enjoy the world out there, as long as they come home…

Is that supposed to be?

I remember you told me, we are sharing both the happiness and sadness… But, it seems like you are sharing your happiness with your friends, while I have to take all my sadness…

You have done so much so much to make love within us, you have shown me how much you love me, you have taught me how to love you, you have given chances to learn… NOW, I have learnt, and I know… But, you are not taking it…

X says:
i think, u indeed love him
X says:
and when he started to become like this
X says:
ur heart broke
X says:
because before this
X says:
u take it for granted that he will not change and will always be that way
X says:
sorry if this sound harsh o
X says:
there is a few choices now, i think
X says:
1) break up, suffer heart ache for a while and recover and move on
2) stay in this and go on suffering heart ache until he learned
3) go on with this and pretend nothing happen
4) pretend nothing ever happened at all

I will definately not going for 1, because I know he will change. He gave me a chance when I was bad before, I need to give him a chance, and I know he will.

I wished I could turn back time, to redo all those mistakes in the past. If only I knew what would be happening next.

Just like now, I seriously think that there were HELL LOTS of mistakes that I shouldn’t have done. All these silly mistakes are turning my life into a miserable broken life. It’s not me in me anymore. I live without soul. I daydream about how nice IF and ONLY IF this wasn’t happening.

Also, I wonder if I could forgive myself?